Well, I had HOPED to post more pics of Pirate Fest, but Blogger is not cooperating whith photo uploading ATM, so more pics will have to wait. The ones below do not mean too much without the others, but oh well. Sorry. =( 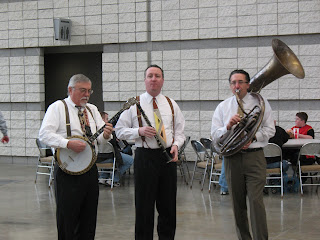 It wouldn't be Piratefest without strolling musicians. 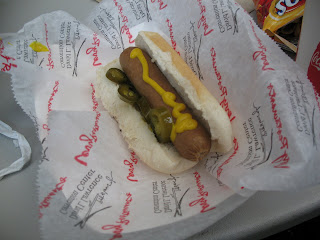 It wouldn't be a baseball-related event without a hotdog! 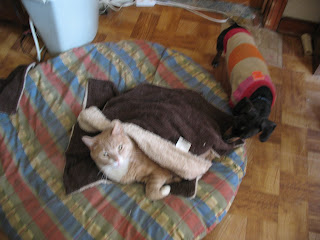 Yes its blurry. But that devious dachshund is stealing the blanket right off Tawney's back! 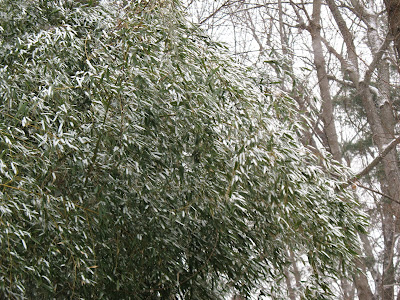 I liked the way it looked on the bamboo. 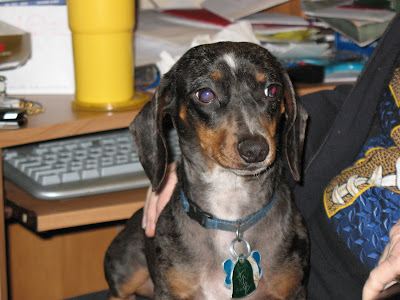 Froth Goes To The Theatre

Went to see Three Rivers Runs Through It, The Second City's sketch and improve show created for the city's 250th birthday! I've seen a few of The Second City's shows before, and have always found them hilarious, and this was no exception.

The show, staged at the Pittsburgh Public Theater, consisted of various sketches dealing with our fair city, interspersed with sketches taken from the regular Second City shows. Mayor Opie was the subject of a couple of funny skewerings, including a very funny song, and the troupe was merciless towards WPXI's sensationalist reporting style.

As is the norm in a Second City show, there were numerous improv bits, some which worked, some which didn't (specifically a bit that was supposed to be about seagulls but broke down into a bizarre bit with two women miming making a sandcastle on the beach while the rest of the cast made strange animal sounds) but such is the nature of improv.

Overall, a fine and funny show, well worth the price of admission, but its only going to be in town through Sunday, so snap up some tickets now!

Before the theatre last night, we dined at Bravo Franco on Penn Avenue. I've eaten here before, and its good, although I find it just wee bit expensive, but we had a gift certificate (thanks Mom&Dad) so what the hey!

I started with the sauteed calamari, and I wish more placed in town offered the tasty sea critters this way. Sure, you can get it fried just about anywhere, and that's fine, but I really prefer it sauteed, and it was just wonderful. The Misses had the wild mushroom soup, gone in a flash so it must have been tasty.

After salads, we moved on to the entrees. I LOOOOVE baby cow, and Franco's has quite a few veal dishes, and I settled on the Veal Romano. Quite good, in a light, lemony, egg batter. The Better Half had the Stuffed Trout Florentine, one of the house specialties. Both dishes were judged yummy by the consumers (us).

On to dessert! She had the ice cream roll, which reminded me of a dessert that Shoney's used to serve back in the day. I had a taste, and it was incredibly rich. There are only two desserts that I really like, and one of them, tiramisù, was on the menu, so I opted for that. It was a skyscraper of tastiness, I'd estimate about five inches high and two inches square, and quite wonderful!

Service was spotty. The attendents were very good about filling our water glasses and clearing away the plates, but our waiter seemed detatched, and strangely unattentive when compared with the other staff moving about the floor. He was quite knowledgeable about the menu, but seemed bored, and we waited ten minutes from the time our entrees were cleared until he arrived with the dessert menu.

Now for the bad part. Dinner for two, with ONE glass of wine, ran us $100.88!!! Hence why I'm not terribly impressed with Franco's. I've had food just as good around town, including downtown, but for a good 20-25 dollars cheaper. It is however, convienent to the theatres. 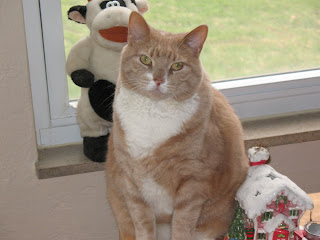 I was watching WPXI's sports segment last night, and one of the genius reporters noted that tonight's game is a "must win" situation for the Steelers. In light of that brilliant piece of analysis, all I could do was humbly raise my beer mug and declare,