According to this story, its illegal for groups of more than 2 people to wear masks at an event. I suspect the police in New York will be very, very busy October 31st arresting and jailing kids. 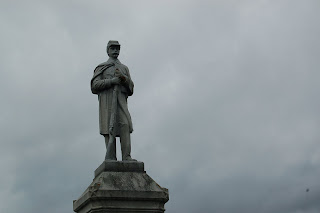 Due to unforeseen circumstances with my family (don't worry, everything is OK) I found myself in Virginia's Shenandoah Valley over the weekend. I had some time to myself, and decided to visit the New Market battlefield, which is unfortunately neatly bisected by Interstate 81. The 1864 battle is famous for the participation of VMI's Cadets on the Confederate side. The cadets played a pivotal role in the battle, filling a hole in the rebel line, and capturing a federal cannon. Ten cadets of the more than 250 on the field were killed or died from their wounds. The battle is also famous for the so called "Field of Lost Shoes." The Bushong farm, where the battle was fought, was a muddy quagmire after several days of rain, and many of the cadets lost their shoes in the mud as they charged the Federal line. It was the last battle the south would win in the valley.

This monument is the only large marker on the field, although there are some smaller stones placed about. It was dedicated to the men of the 54th PA.
# posted by Ol' Froth : 10:33 AM | 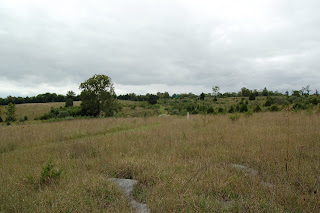 The hilltop the 54th PA crossed. Unfortunatly for them, there was a huge number of rebels waiting for them in the little valley where the large tree at center-left is growing. 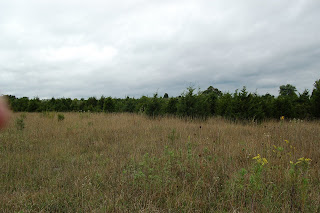 The 54th PA fought a fighting retreat through this field of cedar trees. The soldiers named this area "The Bloody Cedars." When the 54th PA's monument was dedicated, some of the survivors took seedlings home with them. Information from the park states that some of these cedars still stand at a cemetary in Johnstown PA where some of the 54th's members are buried. 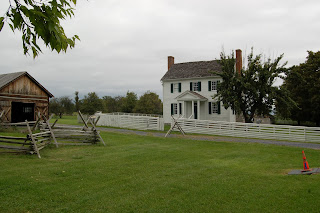 The Battle of New Market was fought on the farm belonging to the Bushong family. 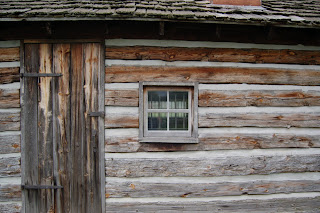 This is the farm's blacksmith shop. 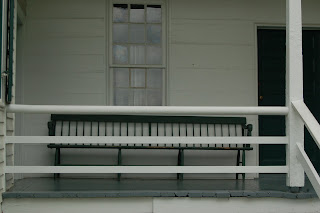 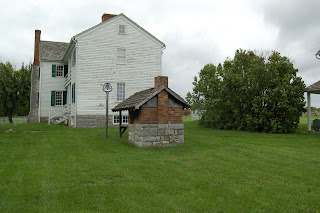 Looking towards the main farmhouse. The small structure with the dinner bell next to it is the baking oven. 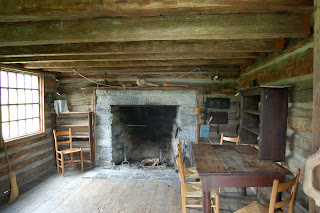 The summer kitchen. Many 18th and 19th century homes had a kitchen in a seperate structure for cooking in the summer heat, so as to not make the main home too hot. 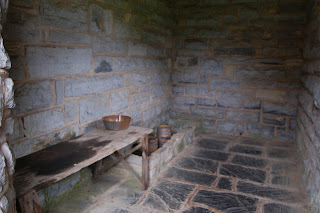 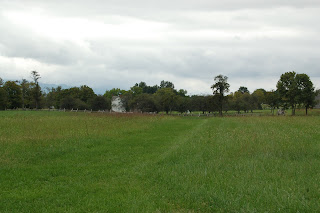 Looking towards the Confederate position. The fence at the far edge of the field by the Bushong farm is where the Confederates formed up to charge the Federal guns. 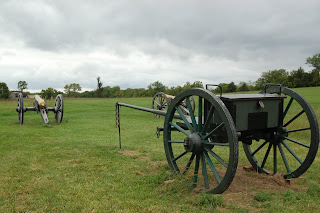 Looking across The Field of Lost Shoes from the Federal position. The guns represent the cannon captured by the VMI cadets. 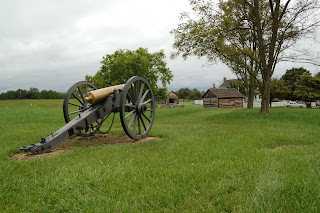 Looking from the Confederate positions with the Bushong farm in the distance. 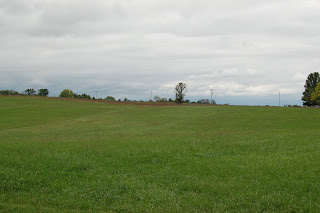 Looking across The Field of Lost Shoes. 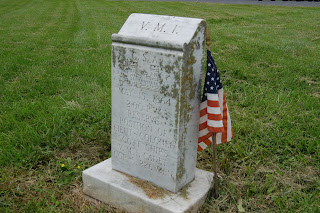 A small monument to the VMI cadets. 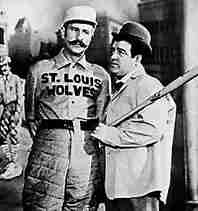 Another from my sister-in-law.

If Bud Abbott and Lou Costello were alive today, their infamous sketch, 'Who's on First?' might have turned out something like this:

COSTELLO CALLS TO BUY A COMPUTER FROM ABBOTT

ABBOTT: Super Duper computer store. Can I help you?

COSTELLO: Thanks I'm setting up an office in my den and I'm thinking about buying a computer.

COSTELLO: No, the name's Lou.

COSTELLO: I don't own a computer. I want to buy one.

COSTELLO: I told you, my name's Lou.

ABBOTT: What about Windows?

COSTELLO: Why? Will it get stuffy in here?

ABBOTT: Do you want a computer with Windows?

COSTELLO: I don't know. What will I see when I look at the windows?

COSTELLO: Never mind the windows. I need a computer and software.

COSTELLO: No. On the computer! I need something I can use to write proposals, track expenses and run my business. What do you have?

COSTELLO: Yeah, for my office. Can you recommend anything?

ABBOTT: I just did.

COSTELLO: You just did what?

COSTELLO: You recommended something?

COSTELLO: For my office?

COSTELLO: OK, what did you recommend for my office?

COSTELLO: Yes, for my office!

ABBOTT: I recommend Office with Windows.

COSTELLO: I already have an office with windows! OK, let's just say I'm sitting at my computer and I want to type a proposal. What do I need?

COSTELLO: The only word in office is office.

ABBOTT: The Word in Office for Windows.

COSTELLO: Which word in office for windows?

ABBOTT: The Word you get when you click the blue 'W'.

COSTELLO: I'm going to click your blue 'W' if you don't start with some straight answers. What about financial bookkeeping? You have anything I can track my money with?

COSTELLO: That's right. What do you have?

COSTELLO: I need money to track my money?

ABBOTT: It comes bundled with your computer.

COSTELLO: What's bundled with my computer?

COSTELLO: Money comes with my computer?

COSTELLO: I get a bundle of money with my computer? How much?

ABBOTT: Microsoft gave us a license to copy Money.

COSTELLO: They can give you a license to copy money?

ABBOTT: Why not? THEY OWN IT!

ABBOTT: Super Duper computer store. Can I help you?

COSTELLO: How do I turn my computer off?

My sister-in-law sent this along!

Eye striks a key and type a word
And weight four it two say
Weather eye am wrong oar write
It shows me a strait a weigh.

As soon as a mist ache is maid
It nose bee fore two long
And eye can put the error rite
Its rare lea ever wrong.

Eye have run this poem threw it
I am shore your pleased two no
Its letter perfect awl the weigh
My checker tolled me sew.

Predictions and Driving the Narrative

Personally, I think its far to soon to speculate on who the Republican nominee might be, but this article has an interesting perspective on who the nominee will be and why.

Now the Republicans in Harrisburg are pushing to replace the "winner take all" electoral vote allocation with a plan to distribute PA's Presidential Electors according to how the vote turns out in each individual congressional district. Governor Bought And Paid For says this needs to be done to "counter" the huge majorities Democrats enjoy in Philadelphia.

Left unsaid, and unremarked on, is that millions of Pennsylvanians live in Philadelphia, Pittsburgh, and their surrounding suburbs, compared to the thousands that live elsewhere. Pennsylvania's largest counties, by population, all surround major urban areas. This is not surprising. These areas also trend Democratic. The more rural areas, counties with populations less than 100,000 comprise more than half of the Commonwealth's count of counties, and contain a fraction of the population. If you added the entire population of Pennsylvania's 28 smallest counties, those with populations under 50,000, they don't even add up to the number living in just Allegheny.

Now, this push comes just as Harrisburg is set to redraw congressional boundaries. Gerrymandering is bad enough as it is, but this is an invitation to seriously screw with the system by creating freakish district boundaries to further dilute the influence of Pennsylvania's majority party. Oh and don't expect relief from the state Supreme Court, which is in the hands of the GOP.

Nebraska and Maine already have the system the Pennsylvania GOP is pushing. But the two states' small electoral vote values mean it's actually mathematically impossible for a candidate to win the popular vote there but lose the electoral vote, says Akhil Reed Amar, a constitutional law professor at Yale University. Pennsylvania, however, is a different story: "It might be very likely to happen in [Pennsylvania], and that's what makes this something completely new under the sun," Amar says. "It's something that no previous legislature in America since the Civil War has ever had the audacity to impose."

Ever wonder why they're only pushing this in blue states, and not places like Texas? Oh, and why are Republicans in Nebraska backing a plan to return that state to winner take all?

What's That You Say?

You'd think that the problems our legislators in Harrisburg have with corruption, highway and bridge repair, public school funding and shale gas extraction would leave them little time to indulge in silliness like this:

Two bills have been introduced in the Legislature to make English the "official" language of the Keystone State, meaning there no longer would be any state government pamphlets or publications printed in any other language.

The bills were introduced by Republicans, of course. Some of the rational given is patently absurd. Here's the sponser of House Bill 888, Scott Perry of York:

"How safe do you feel knowing you are driving your vehicle at 60 mph next to individuals operating vehicles up to 40 tons who have been licensed with minimal standards of English proficiency?

Ummm...they took a test to determine their eligibility for a CDL? What difference does it make if they took it in English or Spanish? How does the language of a test affect the ability to competently drive a truck? Street signs are fairly well standardized in the Americas, an ALTO sign and a STOP sign are both represented by red octagons and mean the same thing. Based on Mr. Perry's standards, US licensed drivers shouldn't be permitted to drive while in Mexico or Quebec.

Then, he gobbles his OTHER foot to the ankle:

"I question the state's right to force its taxpayers to subsidize ... elevated teaching costs and other elevation taxation costs ... for the sake of a minority of individuals" who don't speak English."

Because in Mr. Perry's little bubble of white privledge, no one other than English speakers pay taxes in the Commonwealth of Pennsylvania I suppose, and heaven forbid we use TAXPAYER DOLLARS to educate someone!

Most of the complaints from these elected officials seem to revolve around printing costs of multiple forms, yet they have no problem using my tax dollars to constantly e-mail me "Legislative Newsletters" tooting their own horns. Given the realities of modern communication and computing power, along with the ubiquitousness of desktop computers in gubmint offices, if printing costs were such a concern why not just make all the forms available online, in a multitude of languages? If someone doesn't have intertube access they could always pick a copy up at a government office where they're available pre-printed today, but in the future could be printed up as needed by the staff when requested?

This is a must read story, and shows just how far we've descended into fear and paranoia thanks to the "Be afraid, be very afraid" crowd.

Back To Normal Soon

I have the Irish Festival this weekend, and then should be back on a "normal" blogging schedule. Talk amongst yourselves.