The wife and I spent the holiday week in the gorgeous Shenandoah Valley. The wife's oldest sister got married the day after Thanksgiving, so we made a week of it, visiting her family, enjoying a wonderful holiday dinner, and witnessing my sister-in-law's wedding to a wonderful fellow.

All was not wine, roses and turkey though. We learned that we would have to transport one of my wife's elderly aunts from her hotel to the church, then the reception, and back to her hotel. How bad could that be? This person though, is universally disliked by my wife's family, due to her annoying habit of blurting out bigoted, racists remarks. Auntie (not her real name, but I will refer to her as that) is in her 90's, and was raised in Mississippi during the heyday of Jim Crow, and currently lives in eastern Tennessee. My better half's family is headed up by her father, an elderly retired Presbyterian minister who was on the cutting edge of Civil Rights movement (he once received a complaint from a parishioner for square dancing), and is very liberal in philosophy, making Auntie something of an outlier.

So on my sister-in-law's big day, we loaded up Auntie in Harrisonburg, and started up the valley to Staunton, where the wedding was set to take place. I made small talk with her as the wife drove. As we had just met, she asked me where I was from. I told her I'd lived all over the east coast, but we currently lived in Pittsburgh. The next words out of her mouth?

After retrieving my jaw from the floorboards, I replied, 'Excuse me?" in a tone that I hoped conveyed that this was not an appropriate topic of discussion. Unfortunately, she confused my attempt at polite outrage for misunderstanding, and asked, "How many negros do you have there?"

Flabbergasted, I said, " I have no idea, I've never counted them, and I have no interest in starting now" hoping that my answer would steer the conversation to more appropriate chit-chat.

She seemed disappointed, but might have gotten my drift when she remarked that she didn't like living somewhere that didn't "have at least a few negros." I got a hint of the "some of my best friends" tone from that statement.

Thankfully, she started talking about her friends in Knoxville, and I thought that was the end of it, until she brought up her claimed friends, the Silvermans (not their real name). "Of course with a name like that, they're Jewish" she intoned, "but they're principled Jews."

After my facepalm, I came to the conclusion that there was no point in trying to converse with Auntie. I seriously debated in my mind with telling her how bigoted her statements were, but realized that she probably wouldn't see it that way, and I really didn't want to start a fight, so I clammed up hoping that she would shut up. Seriously, its like the woman's tact clock was stuck in 1952.

After all was said and done, I related this story to one of my brothers-inlaw, and he told me, 'Now you know why no one wants to ride with Auntie."

We've come so far, but there's still such a long way to go.

I'm off to Virginia for Thanksgiving and a wedding. Have a great holiday all! 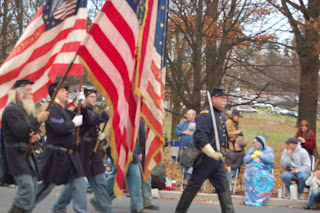 Spent the weekend in Gettysburg, now its off to Virginia for the sister-in-law's wedding!

Trying to use up some leftovers, so I combined some baked squash with pesto, rolled it up in spring roll wrappers, and then deep fried it. Fantastic!
# posted by Ol' Froth : 6:27 PM | 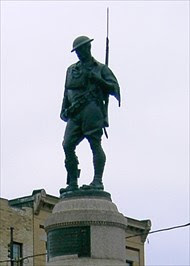 The Baby and the Pirate 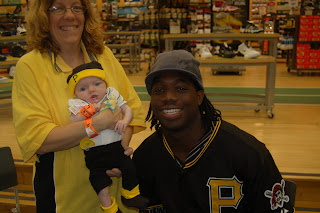 Molly got to meet Pirates leftfielder Lastings Milledge today! Unfortunatly, I lopped the top of my wife's skill off in this photo. Lastings was very personable. He signed a baseball and a picture for Molly.