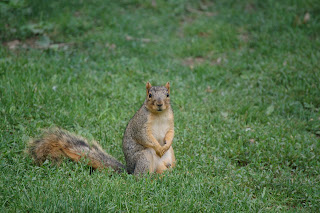 Loved the way this squirrel patiently posed for his picture. 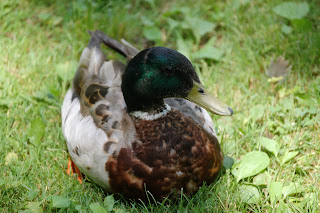 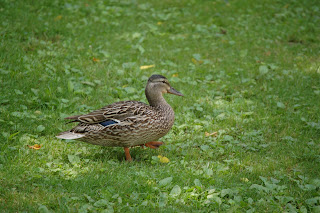 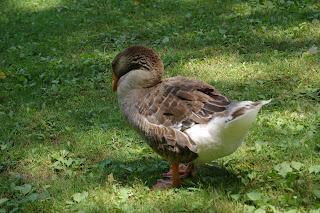 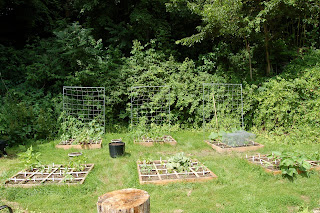 Spent time in the garden dealing with the rabbit damage. Replanted the broccoli and the cabbage (not sure how well it'll do now that its getting warmer). The bok choy, lettuce, and brussels sprouts are recovering well on their own. I made some hot pepper spray and hot pepper powder, then applied both to the plants. The rabbits haven't been back. The ultimate goal is to fence the garden in, there is just too much good habitat for them on the woodline.

Labels: The Garden, The Yard

Hey! Look What I Found! 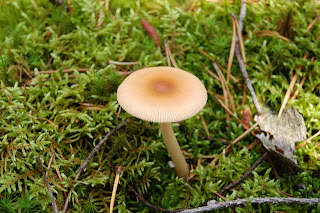 Spotted this little mushroom at the Hillman state game lands last week. I'm told its Amanita Fulva, the Tawny Grisette. Its one of the edible amanitas, but as the amanita group contains some of the most deadly mushrooms in the world, I'm not willing to risk my life if I make a mistake.

We'll be hunting mushrooms at Deer Lakes Park on Saturday. After all the rain we've had this week, it could make for some good collecting.

Tell Me About The Rabbits Froth! 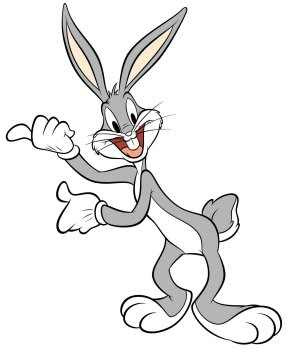 Well, the bunnies are wrecking havoc in the garden. They're munching down the lettuce, defoliating the cabbage, noshing on the parsley, and gobbling up the broccoli. I checked on-line for some non-toxic animal deterrents, and found a recipe for home made hot pepper spray. So I minced some habaneros, soaked them in vegetable oil overnight, added some liquid soap and water, then sprayed liberally (how else?) on the plants. We'll see if it works.
# posted by Ol' Froth : 12:30 PM | 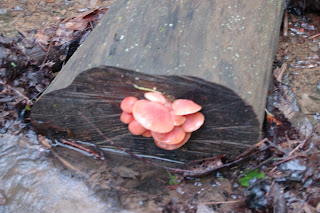 These LOOK like oyster mushrooms, but I've never seen pink oysters. Gonna have to forward this picture to the club and see if anyone knows what they are. Found them growing on a cut log in the middle of a stream.
# posted by Ol' Froth : 3:53 PM | 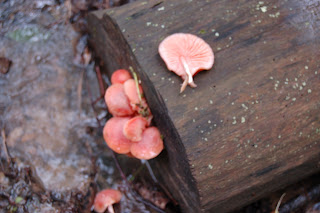 Another shot of the pink mystery mushrooms. 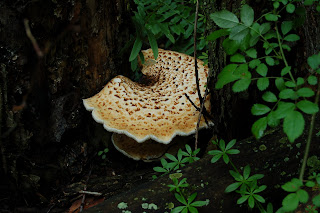 No morels, but plenty of dryad saddles! I like cutting these up into french fry like strips, breading them, and then frying. A very tasty mushroom. I picked about a half dozen, which was plenty as a side dish for me and the wife.
# posted by Ol' Froth : 3:49 PM | 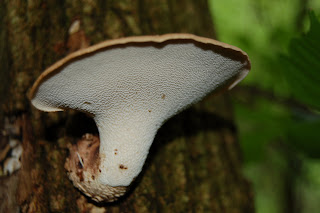 Underside of a dryad saddle. Its a polypore, and has small holes on the underside instead of gills. Smells kind of like a melon. 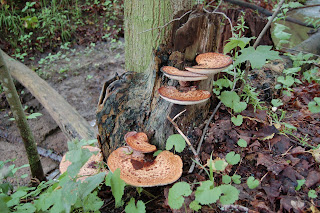 Some older dryad saddle, its a very easy mushroom to safely identify, even for beginners! 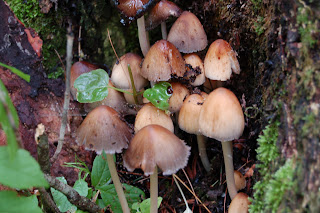 A nice clump of inky caps! You can see the older ones starting to dissolve.

I was shocked when I learned last night that the Pirates dealt Nate McLouth to Atlanta for three prospects. Why, I wondered, would they trade their best overall player for minor leaguers? Why would they sign the guy to new contract this past winter, only to trade him before the season is half over? The team is hanging around .500 without Ryan Doumit, how does this make sense?

And then I started looking at the trade from a baseball viewpoint. McLouth had a great year last year, not a lot of 20hr/20sb guys out there, but look at his career numbers. He's a career .261 hitter. He's hitting .256 this year, right around his career average, and nowhere near the .276 he hit last year. Most of his homeruns were hit at PNC Park (not suprising), but how much of a factor did that short right field fence play? Andrew McCutchen, called up from AAA to take McLouth's place is just 22 years old, hitting .303 with 10 stolen bases, and is by all indications a better centerfielder. The Bucs got two of Atlanta's top prosepects, plus a pitcher who is probably ready to pitch in the Majors.

This trade indicates that the Pirates are building to be a contender in the long term, and not just playing for .500 this year. Time will tell if it plays out the way we all would like, but this was a baseball move, and not a salary dump.
# posted by Ol' Froth : 11:20 AM |