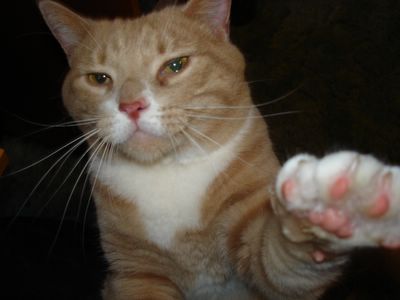 I picked Tawny up early this afternoon, and he's doing well! I need to keep a close eye on him, and make sure he's using the litterbox, so he'll be living in my den for the next week so I can monitor his pee. I never knew there was prescription cat food, but he's on a special urinary diet for the next two weeks. Thanks everyone, for your thoughts! 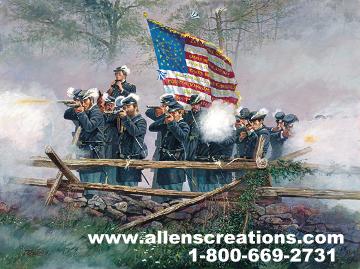 The topic of The Bucktails came up in in the discusssion thread about Captain Dougherty. Here's a little bit more about this famed Pennsylvania Regiment:

The Pennsylvania Reserves, thirteen regiments that fought as the only army division from a single state, ranks among the notable Pennsylvania infantry organizations. Although originally created by Governor Curtin as a reserve force to defend the Commonwealth, the Pennsylvania Reserves struggled on such hard-fought battlefields as the Seven Days, Second Manassas, South Mountain, Antietam, Fredericksburg, Gettysburg, the Wilderness, and Spotsylvania. Pennsylvania's most famed regiment of the war, the "Bucktails," formed the thirteenth regiment of the Reserves. Organized in the timbering counties of northwestern Pennsylvania, the Bucktails sported white-tailed deer tails on their caps as a symbol of their skilled markmanship.

The painting above is by Dale Gallon and is available here. 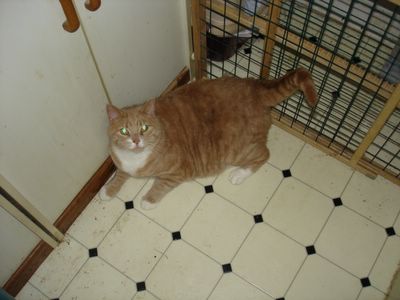 I just got back from the vet's. Tawny was acting very strangely today, meowing and howling (he's not normally vocal) and spending a lot of time in the litter box. I suspected he might have a urinary tract blockage (rather common, and very dangerous for male cats), and the vet agrees. They'll try and get a catheter into him, and will have to keep him over the weekend.

UPDATE: Looks like Tawny is going to be OK. According to the vet, Tawny had a fairly substantial blockage, but they were able to get the catheter in. He'll stay at the vet's for the weekend, to make sure he's properly hydrated and that there are no further complications. Thanks for your thoughts!

A Stone for the Captain 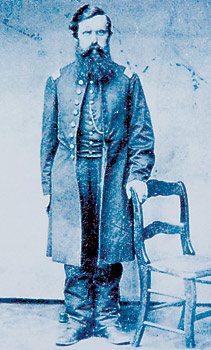 Today's Trib has the story of Captain Daniel Dougherty of the 63rd PA.

Dougherty died June 19, 1864, from wounds suffered three weeks earlier at the Battle of North Anna River, outside Richmond, Va. He was just two months from the end of a three-year hitch with the 63rd Regiment of the Pennsylvania Volunteers. Dougherty survived five of the Civil War's bloodiest battles, from Bull Run to Gettysburg.
He was buried at age 31 within sight of his boyhood home on Cemetery Street, since renamed Carlton Street. ...For 140 years, Army Capt. Daniel Dougherty's unmarked grave drew little notice in a secluded corner of a Lawrenceville cemetery.
That changed Wednesday, thanks to Frank Kelly, of Hampton, who prodded the federal Department of Veterans Affairs to buy a headstone for the Civil War hero.

That the private sector always performs better than the public?

Some experts point to the VA makeover as a lesson in how the nation's troubled health care system might be able to heal itself...Since 1995, the VA says, the number of patients it is treating has doubled, to about 5.2 million. At the same time, the department reports that it has trimmed its staff by about 12,000 people, opened hundreds of outpatient clinics and shifted its focus to primary care, while cutting costs per patient by about half.
"If we've proved anything . . . in the last 10 years, it is that quality is less expensive," ...The VA's metamorphosis began in the early 1990s, when it was under attack and worried about its future. Officials turned to Kenneth W. Kizer. A physician and former Naval Reserve officer, Kizer had earned kudos for helping restructure health services for the state of California.

Boy, it has been a GREAT year for Zucchini! I'm harvesting about twice what I can eat each day from my single plant. This is a variety called "Gold Rush" which obviously, produces yellow fruit. I like this variety because the bright yellow fruit is easy to spot against the green leaves. Traditional zucchini can be hard to spot, and you wind up with tasteless, gigantic baseball bats. Also, the plant will shut down once it produces viable seed, so spotting and picking smaller veggies makes for a greater, and tastier, overall yield.

So what to do with this squash bonanza? I like this recipe, published in the Post-Gazette a few years ago for Mock Crab Cakes:

Combine everything, shape into patties (four large or six small), and fry in a skillet with oil until golden brown on both sides, about 3 minutes per side.

I no longer have the clipping, so I don't know who originated this, but it is very good, and does taste a lot like crab cakes!