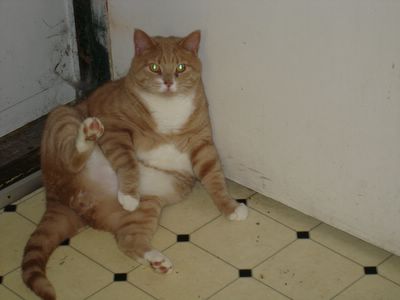 Tawny obviously has no shame, but if he were cognizant that his slothlike pose is loose in blogtopia (skippy coined that) he'd probably poop in my shoes. 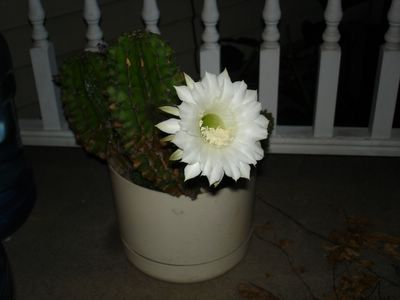 My sister's cactus bloomed last week. I'm a little late on posting the picture, and the flower is long gone, but it was stunning while it lasted. 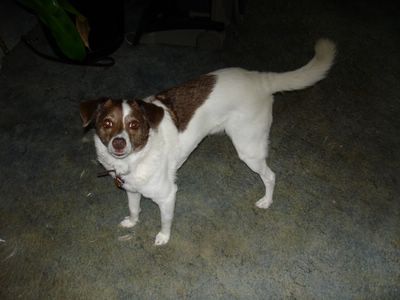 Would like to do nothing more than dig for buried treasure in the cats' litterbox.

Enjoy more of the pictures from our living history weekend along the C&O Canal!
One of these days, I'd like to bicycle the entire length. 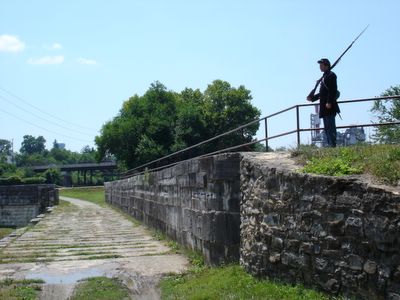 In 1863, the C&O Canal was an important military asset. Troops moved up and down the towpath, and canal boats transported valuable military cargos. It was a target for COnfederate Raids, so in the spirit of the weekend, we picketted the aquaduct to keep it safe from rebel abuses. 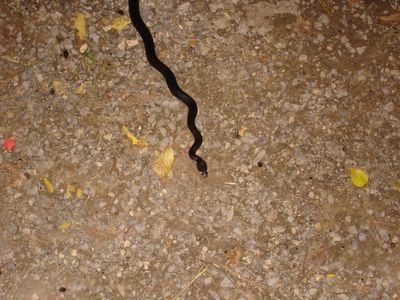 This critter was crossing the towpath headed for the canal when we walked by. It checked us out, and then decided to head back to the weeds on the other side of the path. 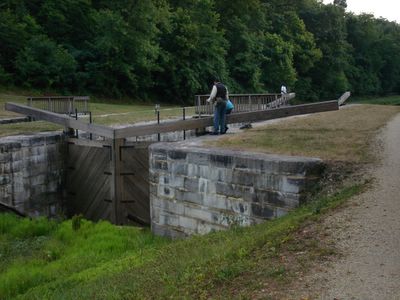 Lock approach from upstream. The mitered design to the gate helps it resist water pressure, while at the same time, allowing the pressure to keep the gates closed.

How Does It Work?? 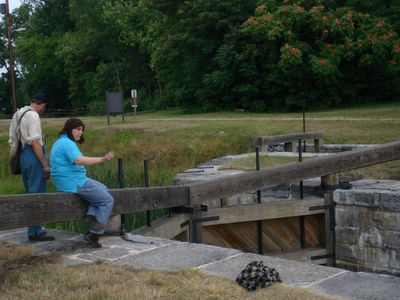 Our friend, Ranger Brianna (in the blue shirt) explains how the lock works. If a canal boat is coming from upstream, the lockkeeper would open the wickets on the upstream gate, and allow water to enter the lock. When the water level was equal on both sides, the gates would open, and the canal boat would enter the lock. The gates would then close, and the wickets on the downstream gate would be opened, allowing the water to drain out of the lock, and lowering the boat. Once the water in the lock was the same level as the lower pool, the gates would open, and the canal boat would continue on its way to Washington. When the boats headed back to Cumberland, the process would be reversed. It took five to seven minutes for a canal boat to traverse the locks. 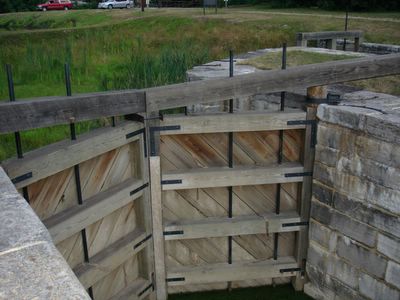 Upstream gate at Lock 44. The mitered design was conceived by Leonardo Da Vinci. The metal poles operate metal (sometimes wooden) paddles called wickets that were opened to allow water into or out of the lock. 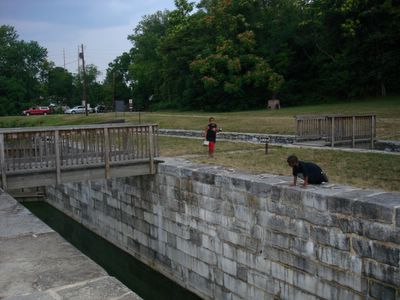 Canal boats were raised or lowered through the locks on their way to D.C. or Cumberland. 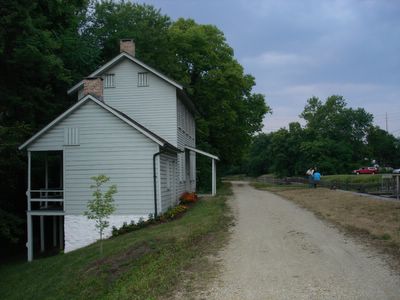 The lockkeeper for Lock 44 lived in this house with his family. This is one of the larger lockeeper's homes I've seen on the canal. The lockkeeper was on duty 24 hours a day, seven days a week. The canal boats carried horns that they'd blow to alert the lockeeper that they were approaching a needed to lock through. 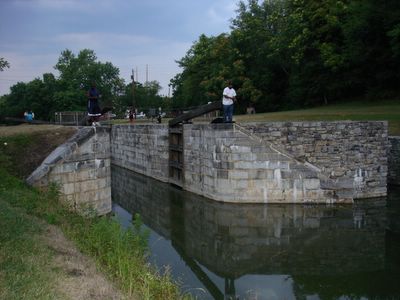 The downstream gate of Lock 44. The man on the stonework is fishing! 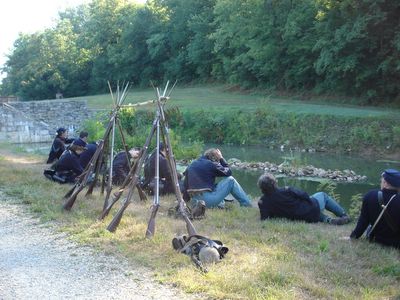 We took a brisk half-mile hike from camp to Lock 44 on Saturday. We're just downstream of the lock, visable on the left. 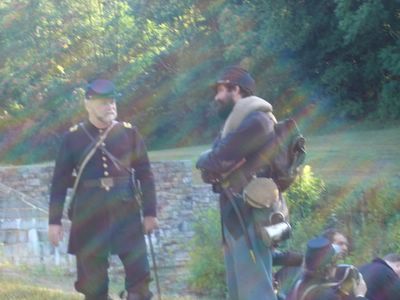 I'm not sure why I got a "rainbow" effect in this shot. Private Hodge gets instructions from Lt. Hart.

Camping on the Canal 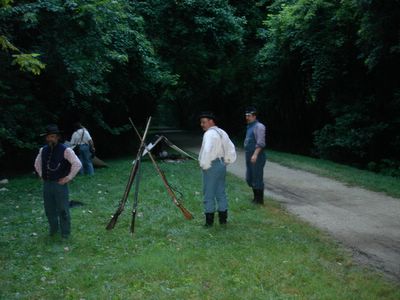 We made camp this weekend along the C&O Canal in WIlliamsport, MD. Interestingly, the real 116th PA was in this area (about 2 miles downstream), at this time 142 years ago, during the pursuit of Lee's army following the Battle of Gettysburg. The pathway in the photo is the canal towpath, where the mules that pulled the canal boats walked. The ditch to the right is the remains of the canal. We answered questions about the Civil War from people coming by camp, and did a couple of drill demonstrations on Saturday and Sunday. It was a great time, I think I enjoy the "living history" encampments more than the big reenactments. 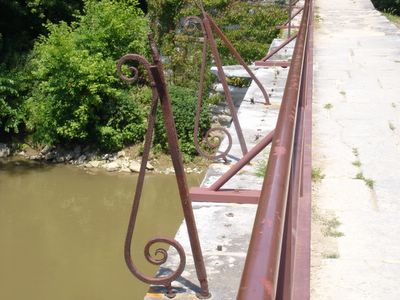 Original iron work on the aquaduct that carried the C&O Canal over the creek at Williamsport. The handrail is a modern safety installation by the park. 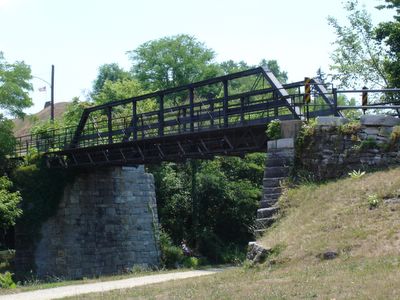 The park service says that this trestle is the only one known of this type. It supports a timber decked bridge that runs over the canal. I don't know what makes it unique, but we did notice that it was constructed using hot rivits, pins, clamps and bolts. It was built in 1879. 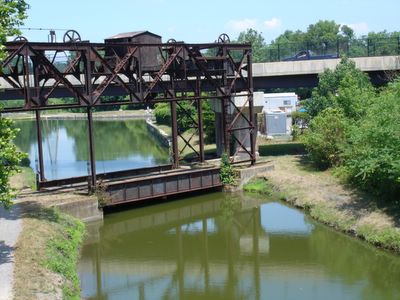 This bridge was for a railroad line that carried coal unloaded from the canal boats at the Cushwa basin to a nearby electric power plant. The bridge could rise up to allow canal boats to pass. It was used only once, because the canal was destroyed by flooding in 1924. 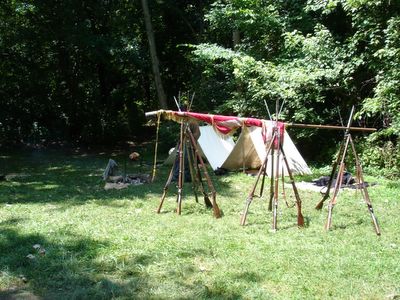 Our regimental colors resting on the musket stacks in camp. That's my tent on the right. 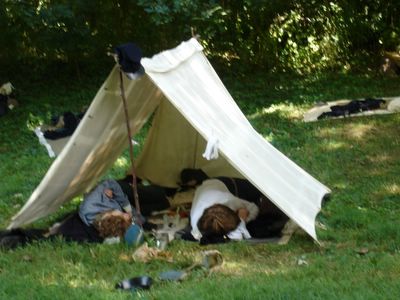 When the command to halt and make camp comes, then it is time to get some sleep!
Typical "dog" tent. Each man would carry a shelter half, and then pair up with a "pard" to pitch their tent, using nearby branches for tent poles. 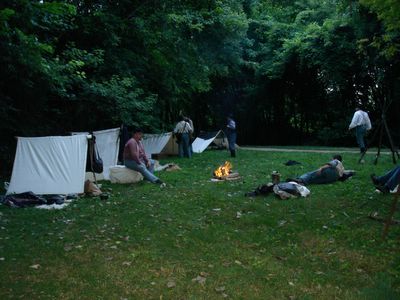 Another shot of camp. 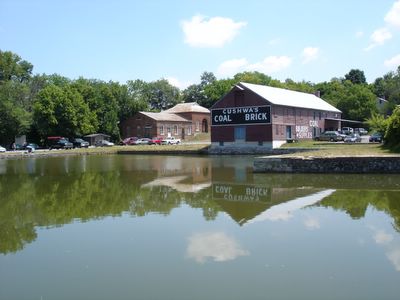 The C&O Canal hauled coal for the most part, hauling it from Cumberland MD, to Washington, DC. ALong the way, some coal would be delivered to canalside businesses, like Cushwa's. The boats could then continue on to Washington, or turn around in the basin and head back up to Cumberland for another load. The building now is home to a Park Service visitor's center. They have some artifacts on display, along with photographs of canal life. There is also a very cool silent film shot in 1917 showing boats going through the locks, the Paw Paw tunnel, and other scenes along the canal. 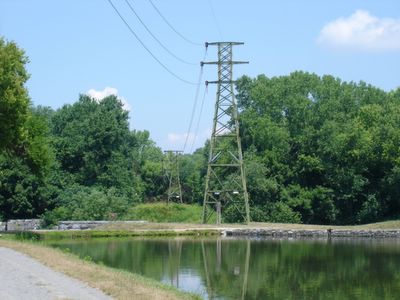 LSqrd is an electrical engineer, and works on power systems. He probably knows more about this type of tower than the rest of us put together. That's the Cushwa Basin in the foreground, and you can see some of the stonework for the aquaduct on the left.

Well, the 116th has been called to action, to persue Bobby Lee out of Pennsylvania and chase him back to the Richmond area, where he belongs! As such, I'll be out of town with Gallant Old Company I, probing for the sesech rearguard along the C&O Canal near Williamsport, MD. It takes a good nose, you can usually smell the rebels before you see them.

You ate a pheasant? 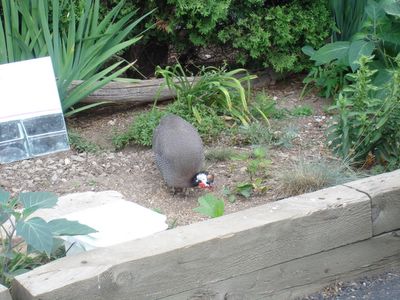 This guy greeted me in the parking lot of the Jean Bonnet. Tasty Bird! 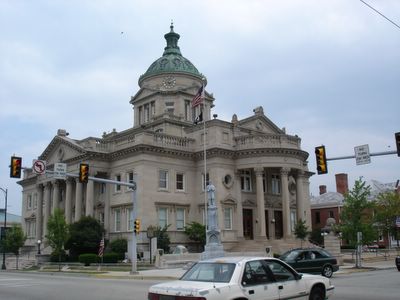 I made a pitstop in Somerset, and took in their very cool courthouse. Typical federal "groundpounder" statue out front. 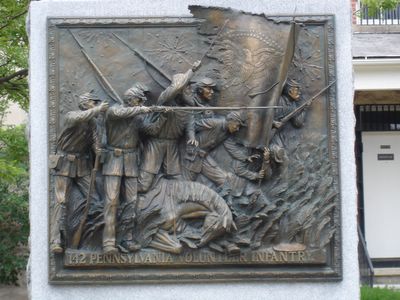 Bronze plaque honoring the 142nd PA Infantry outside of Somerset County's courthouse. The bulk of the regiment was from Somerset, but companies were recruited across western PA. 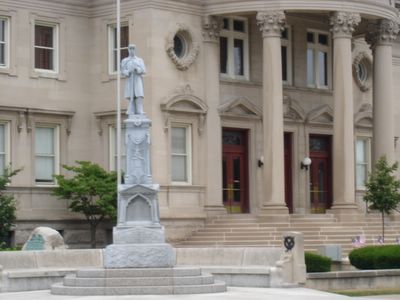 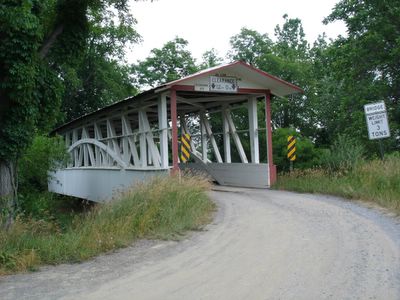 One of the bonuses to taking the senic route. Covered bridge just outside Bedford PA along route 31. 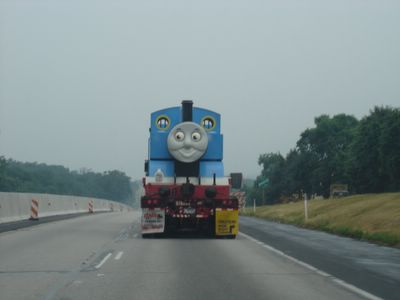 Not your everyday Turnpike sight. Imagine my surprise when I was passed by Thomas!