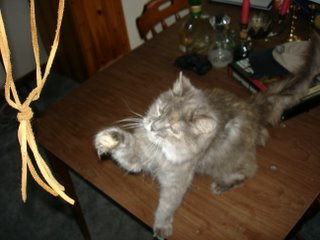 Smokie died early this morning. She was 18.

I realized last evening that she wasn't going to survive the night. She was sitting by my chair, and I was scratching her on the head when she just keeled over. She could no longer stand, and as I held her in my lap, I could see that she was starting to fade away.

I tried to make her as comfortable as possible, and stayed up with her for as long as I could. Before I went to bed, I held her one last time, and whispered to her to dream of the chipmunks she used to chase as a kitten.

Sometime later while I was sleeping, she went to The Rainbow Bridge, to wait with Earl, Cattishaw, and Ginger.

Smokie and I went through a lot together. Two states, eight different homes, and a few adventures. Once, when she was a kitten, she managed to sneak outside unnoticed on a cold morning. When I finally found her hours later, she was nearly frozen, snow and ice sticking to her fur. I got her inside, warmed her up in a towel, and she promptly stalked to the radiator and stayed there all night, enjoying the warmth.

In Oil City, we lived in a small apartment on the third floor of an old Victorian-style home. One evening, a bat got inside. As I tried to capture the bat in a plastic bucket, Smokie raced about, never taking her eyes off the mouse with wings.

As for landing on her feet, she tumbled out a window of that third floor apartment while I was at work. I came home to find the window screen torn out at the lower seam. She must have been leaning against it while sleeping, and the screen gave way. I found her cowering under the porch, frightened, but otherwise unharmed.

She was a very personable cat, but she had an expression of extreme annoyance on her face at all times, which is why I constantly referred to her as my little grump. Although she was an indoor cat for most of her life, she liked sunning on the patio, and on warm days I'd take her outside on a leash, and she'd sit with me on the lawn chair while I read. Her favorite toy was a grey catnip mouse, which I buried with her out back, next to Cattishaw who died a couple of years ago.

I miss her very, very much.