My Oh My Thai!

Monday night I visited My Thai in Shadyside as part of my weekly resturant sampling. This is a nice little eatery on the thrid floor of 5401 Walnut Street. I started with the Crispy Wontons, which are described in the menu of as "ground pork, sweet radish, red onion, white onion, peanut, wrapped with wonton skin, then deep fried and served with homemade pineapple sauce. As advertised, they were crispy, and surprisingly light tasting. Yummy!

The menu indicates spiciness by the tried and true "chili pepper" indicator. No pepper pic, not at all spicy. One pepper mild, two pepper medium, and three pepper hot. Wouldn't you like to be a pepper too?

My main course was the Sawasdee Seafood, one of the resturant's specialties. This was a two pepper dish, and while I like hot and spicy food, I usually go with "medium" heat to gauge wether to get it a little hotter or a little milder the next time.

The dish included "shrimp, scallops, squid, and mussells stir-fried with broccoli, carrot, bell pepper and basil leaves" in what is described as the chef's "special sauce." The food arrived on a sizzling iron plate, with a bowl of sticky rice on the side. It was delicious, and although a little on the mild side for me, most palates would probably find it very spicy. The squid was slightly overcooked, making it a bit rubbery, but it was certainly edible and quite delicious. I washed it all down with a Thai beer. The proprietor came by the table and checked to make sure my food wasn't too hot, which I thought was very nice. I assured him that it was next to impossible to make my food too spicy.

Dinner for two came to just over 40 dollars. Well worth the money, and if you live nearby, they'll deliver! 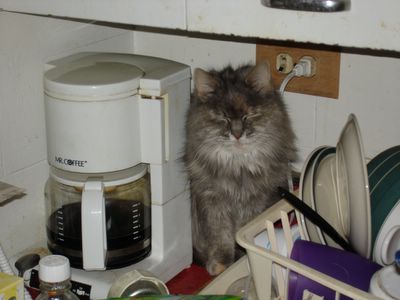 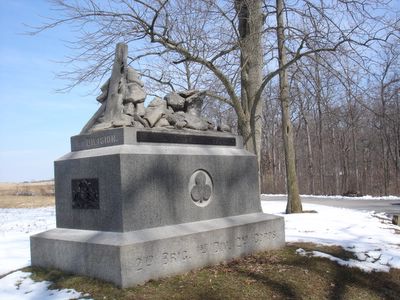 It was back to Oakland last night for more Monday Night Dining! This time, I went to India Garden at 328 Atwood St. They have a second location at 3813 William Penn Highway in Monroeville.

I started with the Vegetable Samosa. I was expecting something along the lines of a springroll, but I received two HUGE turnovers, resembling in size and shape a chicken croquet. Lip smacking good!

For the main course I had trouble deciding between the Shrimp Vindaloo and the Karahi Shrimp. I settled on the Karahi, which came with tomatos, onions, garlic and spices. You get to indicate how hot and spicy you want your dish. I chose medium, which is probably too hot for most people, but next time I'll probably go for hot, as I like my spicy food blazingly hot.

To drink, I ordered an Indian beer, can't remember the name but I was dissappointed to see that it was brewed in Saratoga Springs! I was good though. I also had the "special" tea which was dark, flavored with cardamom, cloves, and cinnamon. It was fantastic!
I'm not a dessert guy, so no "afters." 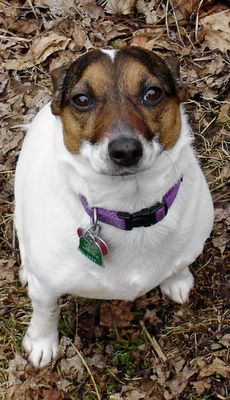 My parents, sister, and niece are out of town for the Easter holiday, so I'm taking care of their dog, Jackie. So far she's getting along with Britt, and seems to enjoy being able to run in the yard. 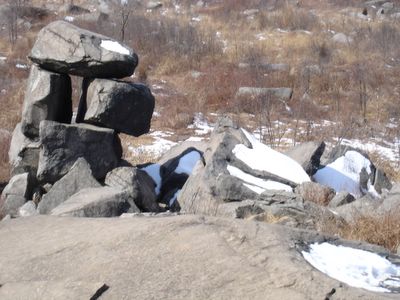 Rock pile on the slope of Little Round Top.

I dined last night at the Fuel and Fuddle in Oakland last night, a bar/eatery that I've been to before, and enjoyed. Last night however, was not so enjoyable. I started with the Ying Yang rolls, a tasty vegetable eggroll. It comes with plum and mustard sauce cleverly arranged in a Ying/Yang symbol. Crunchy and tasty!
I don't eat meat during Lent (with the exception of St. Patrick's Day related activities) so I had the Left Coast Veggie Pasta for my entree. The menu describes it as "Penne tossed with white wine, virgin olive oil, garlic, sundried tomatoes, shitake & portobello mushrooms, pinenuts & finished with fresh grated asiago.
Let me tell you, this was a bland and disappointing dish. If there was any garlic in it at all, I was hard pressed to tell. Perhaps they waved a clove at it? You can make this at home easily. Boil up some penne, drain, dump a can of tomatoes in it, along with some canned mushrooms, heat through, and top with tasteless cheese. Defiantly not worth the $7.50 they charged for this mess, and no where near the quality and taste I've come to expect. 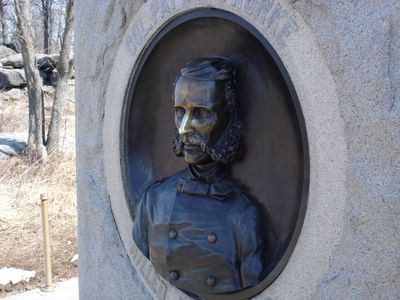 Patrick O'Rorke, one of the Federal heroes of the Battle of Gettysburg. He led the 140th New York in a charge that helped secure Little Round Top, and was killed in the battle. Rubbing the sculpture's nose is supposed to bring good luck, and it remains shiny from the continuous tweaking. 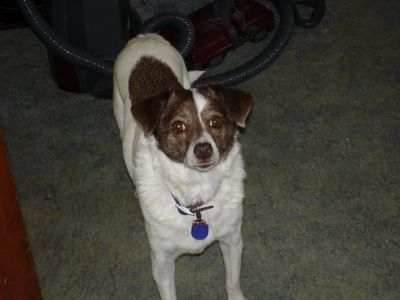 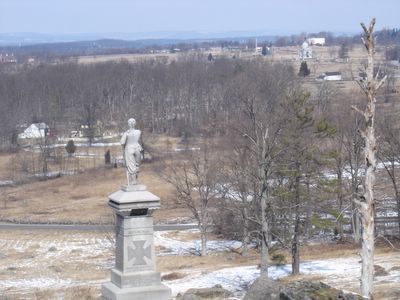 Looking north from the top of Little Round Top. The main Federal battle line (at least where it was supposed to be before Dan Sickles advanced his III Corps to the Emmitsburg Road) extended along this line before curling around Culp's Hill. You can see the Pennsylvania Monument and the Cyclorama Center in the background. I think this shows how important Little Round Top was to the US army at the Battle of Gettysburg.

On Top of Big Round Top 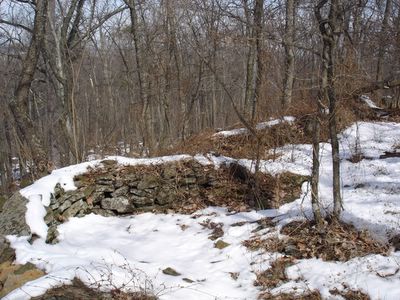 All covered with snow! Infantry breastworks, built in a "lunette" shape, probably by Federal troops placed here on July 3, 1863.
I've been to Gettysburg dozens of times, but I never climbed to the top of Big Round Top until this last weekend. The slope is steep, but the climb isn't difficult thanks to a trail with many switchbacks. The most difficult part of the 20 minute ascent was dealing with the melting snow on the path while wearing sneakers. 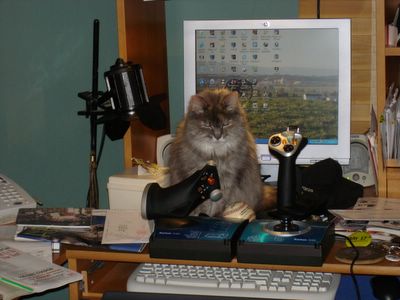